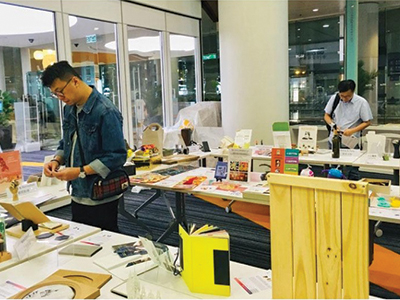 HONG KONG - The Hong Kong government will help local creative products enter markets in other places in the world, said Bernard Chan Pak-li, Under Secretary for Commerce and Economic Development on Friday.

Chan was speaking at the launching seminar of Hong Kong Smart Design Awards.

Praising the accomplishments of Hong Kong designers, Chan said their work was not only creative but also has a global prospect.

The government has an obligation to provide better development opportunities for local designers to help them reach global markets, Chan said.

The government has been working with the Chinese mainland and other countries to launch favorable policies for Hong Kong enterprises, especially through Belt and Road Initiative and the Guangdong-Hong Kong-Macao Greater Bay Area development plan, Chan said.

So far, the current-term government has injected US$300 million to help small and medium-sized enterprises, said Chan. One measure is to allow them to use this fund to explore South Asia, in addition to the mainland, said Chan.

In the past two years, the Hong Kong government has invested considerable resources to optimize the infrastructure and cultivate talents for technological innovation, according to Chan. Many traditional industries in Hong Kong now require innovative models such as online-to-offline (O2O) commerce to enhance their competitiveness, Chan said.

The Hong Kong Smart Design Awards, organized by Hong Kong Exporters’ Association (HKEA), is in its 7th edition this year.

According to Brian Sun, vice chairman of HKEA, nearly 150 companies and 300 individuals participated in the competition. A total of 90 awards were presented.

An intelligent walking stick named STICKu swept three awards -- the gold medal in the “leisure and recreation” sector, judge award and smart aging award. Its function includes lighting, heating and making emergency calls. It can send alert to a specific contact point when it detects the user’s falling motion, saving time in the emergency assistance process.

"Hong Kong’s brands still have to explore the mainland market with an aggressive attitude, especially making good use of the Shopping Festival on Nov 11 every year. That is a great opportunity for Hong Kong companies, especially for their online businesses,” said Leung.